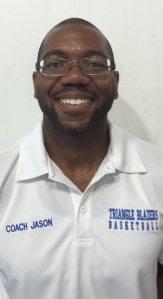 Coach Jason has been a basketball fan his entire life.  He lives for spreading his love of the game and molding young athletes.  His belief in teamwork—that indescribable feeling that can only be replicated by encouraging a struggling teammate just to see him come through in the clutch—a commitment to excellence, the continual striving for perfection…this is what motivates him every waking morning and the characteristics he works to instill in his players.  Coach Jason has been coaching with the Blazers for 7 years.

Growing up in Jacksonville, NC, Coach Jason spent his prep career playing basketball and as a track & field sprinter and hurdler.  Graduating with a Bachelor of Science in Computer Science and a Masters in Economics from NC State University, do not be surprised if you see him in the crowd (or on TV) at Wolfpack basketball and football games.  Currently living in Holly Springs, NC with his wife and two daughters, Coach Jason spends his days as a software developer and his nights coaching or attempting to stay in shape by playing in basketball, softball and flag football in leagues around the Triangle.